The Nipponzan Myohoji Peace Pagoda, founded by Nichidatsu Fujii in the 1930s, was the first Japanese Buddhist group to issue a declaration against nuclear energy after the Fukushima incident (see below). Even before the earthquake and tsunami disaster, they were actively involved in the problem of nuclear arms. They are also the only Japanese Buddhist denomination to continually have a group representation at public rallies and demonstrations against nuclear energy since March 11, 2011. For background on their founding, development, and views on social justice and civil protest, see: Which Way to Peace? Part I: The Role of Japanese Buddhism in Anti-Nuclear Civil Protest & From Fukushima to Hiroshima … and in between: On the Road with the Dhammayatra of Life  as well as continual updates on their activities here 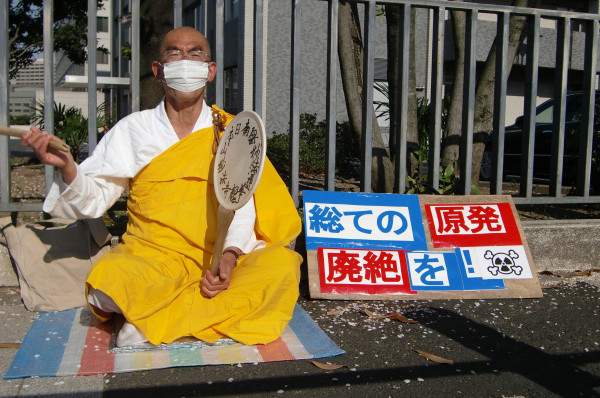 A monk from the Nipponzan Myohoji Buddhist denomination demonstrates in front of the Japanese Prime Minister’s Official residence. April 15, 2011.

Such is the overwhelming natureof atomic power.

We must understand how “the use of nuclear power” and “the sustainability of life” are incompatible.

The extreme suffering of Fukushima today should not become the Shizuoka of tomorrow.

It is our duty to the world to carry this out.

We cannot allow Japan to become a country that spreads radioactivity. In order to take a step in showing our self-critical reflection and revival, we must show to the world first that we can stop the Hamaoka Nuclear Power Plant. 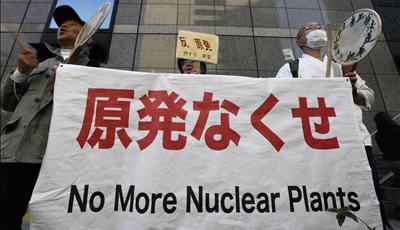