Considering the Inter-relation between Restoration and Co-existence

Rev. Masazumi Shojun Okano is the President of the Kodo Kyodan Buddhist Fellowship. After graduating from Keio University in Tokyo, he received his (D.Phil.) from Oxford University in the United Kingdom and spent time teaching in universities in the United States and Hong Kong. Rev. Okano serves on the Executive Committee of the All Japan Buddhist Federation and the Advisory Committee of the International Network of Engaged Buddhists. 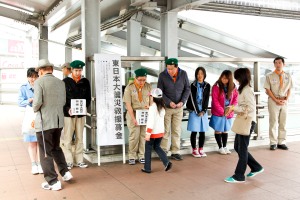 After the March 11 disaster, the first thing our Kodo Kyodan (Kodosan) denomination undertook was to engage in fundraising both within and outside of the denomination. By June, we had raised about $90,000. The offerings and donations that we collected were not given to the Japan Red Cross or the government’s aid system but rather to two different NGOs. One of them is SHARE (Services for Health in Asian & African Regions), an international NGO involved in medical aid. After the tsunami, SHARE first collected information in order to create a base for delivering emergency aid on a short and mid term basis. If it was possible, they said that creating a base at a Buddhist temple would be good. In this way, we volunteered the use of our Tohoku region sub temple located in Yamagata City. Being located a 40-50 minute drive from the hard hit city of Sendai, the temple could act as a base for delivering materials and medical supplies. At first, doctors, nurses, and public health workers would work for days in the disaster areas and then return to the temple for rest on a rotating basis.

The Management of Volunteers

Afterwards, SHARE moved their base to Kesennuma City, where  the  public administration was in a state of paralysis. The city hall had been hit by the tsunami, and many of its civil servants including doctors, social welfare workers, and public welfare workers had died. The town’s basic information had basically been all destroyed in the damage, and so they had to start from zero. The doctors and nurses from SHARE did steady work going from house to house collecting information on the people’s conditions and providing it to the city.

As the SHARE staff were engaged in these activities, we dispatched volunteer drivers from our denomination in order to help them. Day in and day out, doctors and nurses were doing hard work and then had to write reports late into the night and begin again early the next morning. The disaster areas were strewn with debris and wreckage, so accommodations had to be some distance away. In this situation, we received requests for drivers. The drivers from our own denomination worked for free for 2-3 months until SHARE decided to hire local drivers.

From within SHARE, doctors and nurses from all over the country came to work in five day to one-week shifts. Because the doctors and nurses were so busy, they tended to neglect their own health and eating habits, so it was important that they ate and rested properly. We dispatched believers and our own employees to respond to their request for having people who could look after the medical staff by doing errands and making meals. In these ways we provided background support for the medical relief work in the disaster areas .

The Connection Made through Local Performing Arts

In Kesennuma, The Japan Volunteer Center (JVC) was the  first NGO group to represent the government and performed the role of acting as a volunteer center. As Kodosan has had a long time association with JVC, we thought it would be easier to do activities with them and SHARE in this area. We started providing hot meals to the victims in coordination with JVC, mostly on the weekends. Our members from Yamagata and our main temple in Yokohama as well as staff from our main office participated actively in this work.

Through this work, we made some rewarding relationships, such as during the Golden Week holidays in early May in Nami-ita, a hard hit area in Kesennuma. One such connection was with a local performing arts group. In Nami-ita, there is a tradition of local performing arts called the Tiger Dance that has continued from the Edo Period and has been designated by the government as an “intangible cultural asset”. When we were providing hot meals at a village in which half of the houses were destroyed by tsunami, we found out that many of the villagers were members of the Tiger Dance group. When they discovered that we came from Yokohama, one of the leaders of the performing arts group approached me and said, “We have been invited to perform next month  at the Y152 Festival for the 152 anniversary of the opening of Yokohama Port. At first  we asked the sponsors for the expenses of up to 30 people. However, at this time, we want everyone, which is more than 50 people, to participate so that it will be a sort of mental boost to get going with the local reconstruction work.” While thinking that this was a good idea, I heard him say that, “We do not have enough money for accommodations for all of us.” So I proposed to him, “How about you stay with us at our temple.” To which he responded, “We will kindly accept.” So about 50 people from the group including children and their guardians stayed with us at our main temple in Yokohama. They also performed the Tiger Dance at our temple. Through this connection, we were later able to perform a memorial service in Nami-ita during the mid August Obon festival where we chanted together from our denomination’s sutras.

The traditional performing arts that took root in this region formed the core of the local identity. They have been transmitting from generation to generation their own inherited history and culture through these traditional art forms. We could feel the enthusiasm that these performers had for connecting the revitalization of their devastated communities with the prompt restart of the Tiger Dance performances.

Kodosan gave shelter to dozens of people in its branch temple in Iwaki City in Fukushima, about 40 kilometers from the troubled nuclear plant. As the fear of radiation worsened in the region, about 40 people, especially young children, left the region and took shelter at our headquarters in Yokohama. After a long week during which most of the lifelines were crippled, they arrived here at the head temple and enjoyed a hot meal and warm bath. During their stay, the temple also organized games, counseling, and sightseeing around Yokohama to raise their spirits. Special lectures and programs were also organized to teach them Buddhist teachings and meditation. Some of them shared their experiences in the temple’s daily testimonial sessions.

On my subsequent visit to Iwaki on April 17, I had the chance to meet and talk with a person at the city’s policy headquarters. There were 1,000 temporary houses being built there. When talking with the staff from SHARE, judging from their experiences, they predicted that there will be many difficulties once they start moving victims to these units. The victims were initially housed in shelters that had no individual rooms therefore had no privacy. But the local governments were actively involved in providing them with necessary goods and food by connecting NGOs and volunteers to these shelters. Moving into the temporary houses will guarantee privacy but at the same time there will no longer be goods and food provided for by governments’ involvement. The central and local governments want people to become “self-reliant” once they move into these houses, but naturally that is very difficult to  achieve. Those people have lost their houses and many of them are out of work. The person at the Iwaki City government told me that the city administration will not act as intermediary for the NGOs and volunteers to work in the temporary houses because the government wants the people to be self-reliant. There is also the thinking of the government that they cannot do anything that is “unfair”. For example, since offering hot meals to 200 people—which is the maximum quantity that our group can usually provide for in one operation—at a temporary housing site of 1,400 units is unfair for those who cannot receive the meal, it cannot be allowed. It seems only non-governmental groups have the kind of flexibility to perform such work. I think it  will be important that this sort of work will be done by many individuals and groups working together cooperatively.

Thinking in this way, religious denominations as well should be more flexible in coming up with ways to help the people besides the normal religious services. Buddhist priests can do more than just offering support through funerals and memorial services. There could be many different ways to help people come to terms with their suffering, to regain strength to live and rebuild their communities, and to prevent them from becoming isolated and alienated.

In Buddhist based activities of helping others, we can certainly discover the spiritual meaning of generosity or giving (dana/fuse). Giving is the practice of  refining one’s own mind and it is done for one’s own spiritual benefit. The attempt of helping others may end up in failure, or others may not appreciate what you have done and may even criticize you. These are the times when we must remember that we are engaged in refining our mind. At the same time, however, we must not forget that the final goal is to help the disaster victims become re-energized, self-reliant, and happy.

All of our followers who became volunteers were quite delighted on their return home. They said they gained so much positive energy from the experiences. After the disaster, there were of course many people who felt they wanted to help out in some way, but not all of them could actually find something that they could do. In the case of our members, they were given opportunities to do work such as being a driver, helping with hot meals, or cleaning up debris. They also became filled with the sentiments and words of gratitude expressed to them by the victims. This is why they are delighted. When we have meetings of our support projects, usually the participants are filled with positive energy.

I think this kind of atmosphere shows the meaning of co-existence or inter-being in times of disaster. New connections come to life during disasters. When one sees the energy that comes from the connections among the victims and with the people from outside who support them, there comes some hope for the future. In recent years, we have seen the development of what is called “a society with no connections” (muen-shakai). Amidst this present condition, many of us know that we desperately need to re-connect with each other, but in reality we are unable to do anything. However, in the disaster areas, there is a tangible feeling of people-to-people bonds and heart-to-heart connections being made. I think this has become a noble experience towards not only rebuilding the disaster areas but also revitalizing Japanese society as a whole .

This article first appeared in the Bukkyo Times on September 15, 2011

on the March 11 Disaster

Appeal for Relief Aid for the Eastern Japan Earthquake Disaster

The Kodosan Disaster Relief Project has initiated emergency aid fundraising. We ask for your heartfelt understanding and cooperation in this work. The purpose of the fundraising is to provide emergency medical aid and aid for children. We will be supporting two organizations to do this work at shelters and elsewhere. One is Services for Health in Asian and African Regions (SHARE) which provides emergency health and hygiene aid as well as medium and long term aid. Kodosan is also offering its Tohoku Branch Temple in Kojirakawa-machi, Yamagata City to SHARE to store various material resources and offer a place for its workers to lodge. The other is Caring for Young Refugees (CYR) which has the aim to create secure environments for children affected by disasters.