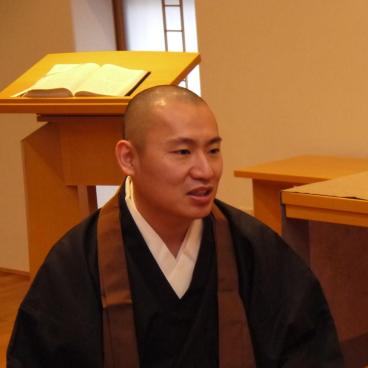 The 2nd workshop focused on the two practices of Self Care and Team Care. The facilitator was Rev. Daihaku Okochi, a Jodo Pure Land denomination priest and vice-abbot of Gansho-ji temple in Osaka. As a young divinity school student, he began volunteer work at the Nishi Nagaoka Hospital Vihara hospice ward, one of only two Buddhist based hospices in Japan that was created in 1993 in collaboration with the Jodo Shin Pure Land denomination’s Vihara Movement. After graduating, Rev. Okochi spent one year as a Buddhist chaplain at the hospital before returning to his home temple in Osaka and creating the Vihara 21 group. Just this past year in 2012, he created the Life and Rinsho Buddhism Association.

For the first half, Rev. Okochi began with a talk on the components of Self Care. Firstly, he reviewed the basic difficulties that the Rinsho Buddhist chaplain must face: 1) getting intimate with the suffering of others, 2) confronting the insensitivity and contradictions of society, 3) encountering the powerlessness of the self to change things, and 4) a spiritual questioning of the absence of “Buddha” or enlightened nature.[1] He then entered a discussion of “working with emotions” and getting in touch with them, noting how this is such a major factor for nurses, care givers, and people in the service industry. This involves both physical and mental work and has the specific aspects of: 1) the indispensability of directly getting in touch with the other person, either face to face or through speaking, 2) the need to transcend the emotional fluctuations that occur in the other person (and hence moving towards healing of suffering and mental peace), and 3) on a systemic level, understanding the extent of control that an organization has over the emotional functioning of the people involved in it.

Rev. Okochi then discussed the identity of the Buddhist chaplain. He spoke of getting free from the notion of “being a Buddhist priest” in terms of the way of speaking and behavior that is demanded of priests and the kinds of feelings they are expected to have or exhibit. He then spoke of the fatigue that comes with empathizing and identifying with others. Identifying with others entails getting in touch with the feelings of grief and deep empathy for a person experiencing pain and adversity and hoping to remove the causes of pain in the other and to cure them. However, this can lead into various traps that lead to “empathy fatigue”, such as getting caught up in the others feelings, the sacrifice of one’s own time, and the destabilizing of one’s own self.

After providing a checklist of the kinds of stresses care givers can experience in this work, Rev. Okochi spoke of the 3 kinds of Self Care. The first is finding an appropriate space to deal with the feelings that lead to fatigue, and this involves making oneself the top priority so that one can take a break from feelings of weariness and difficulty. The second is becoming more self-aware and becoming clear when one is feeling fatigued. This involves becoming aware of what runs you down, being honest with yourself and knowing your limits, and having the courage to let go. The final kind of self-care is seeking out support from piers when one is in pain and fatigue. This involves first of all making piers rather than trying to cope with things on one’s own, then making space to actually receive such feedback, and finally reflecting on one’s own state of mind and attitude towards what is happening.

Rev. Okochi concluded this talk by outlined the 3 ways to avoid burnout: 1) placing importance on one’s self, on receiving support from others, and on those actual people who provide such support; 2) building the strength to care for one’s own growth and development, for one’s emotions, and for one’s own limits; 3) developing knowledge concerning confronting stress and trauma, and the fields of clinical psychology and psychosomatic medicine.

After this talk, Rev. Okochi then led the group through an initial process on Self Care. The 30 or so participants sat around tables of 4 persons. He then asked them to write down on separate post-it notes at least 3 different things each person does amidst their daily lives to take a break, rearward oneself, and heal oneself. This might include spiritual practice such as meditation or chanting, or more common things like exercise or taking a hot bath. For each activity, the participant was to include the place, the reason, and with whom one does this activity. Then, they were asked to place them on a quadrant chart divided vertically by “inner” and “outer/physical” and horizontally by “with others” and “alone”. After working alone on this, the participants spent time in their own small groups discussing their experiences together.

After this small group work, the participants all gathered in one large circle for a mutual sharing session of 30 minutes. In the center of the room was placed a “talking stick”, and during this session only the person holding the stick was allowed to speak. Everyone else was encouraged to listen quietly and deeply, while the speaker was encouraged to speak about anything that was on their minds, important or not, very recent, or something lingering inside them and causing anxiety or confusion. The speaker was allowed 3 minutes, after which there would be no advice or follow up on what the person said but simply the moving on to the next speaker. This activity was designed to learn about the creation of open nonjudgmental space for people to speak freely. Japanese are well know to be shy and often unable to open up freely about their inner feelings, especially with relative strangers, without having a few beers at a bar. It was, therefore, quite interesting to see the initiative and speed many people in the group took to share and the depth of many of the reflections amidst this relatively new grouping of religious persons.

Rev. Okochi then moved on to the second half of his presentation on Team Care in which he talked about “speaking” and “listening”. In terms of “speaking”, he addressed the issue of self-disclosure and the examination of the self in three parts: 1) confronting the way one chooses to say and what to not say at any moment, and the encounter with what one has already said in terms this bringing one to a new sense of self; 2) coming to know one’s self through what one says in terms of one’s world view and values as well as one’s understanding and sense of meaning for human relationships and what one can accomplish in one’s life; and 3) the experience of care giving in terms of a continual awareness of this sense of meaning of human relationships and how one can change and re-examine what is important to one’s self. In this point, Rev. Okochi pointed out that while experiencing what others have to say, it is also important to re-affirm one’s own position when involved in listening to people who have been wounded or had terrible experiences, listening to people who have had happy experiences or who boast of themselves, while taking it all in with a sense of non-judgment.

In terms of “listening”, Rev. Okochi spoke about 5 issues: 1) The process of one’s own emotions coming into focus is not about anticipating the emotions of the speaker but rather keeping an eye on how one’s own emotions are affected. It involves not judging the values of the other but questioning how things are taken in while engaging in intimate communication; 2) coming into contact with intimate emotions is more about getting “the message” of what the person has to say rather than the information about their situation; 3) catching the feelings of a person’s life in certain situations as “myself today” that reveals the process of their emotions; 4) caring for the way emotions are expressed and communicated, which involves becoming aware of the expressions themselves and not the expressions as signs of feelings within; 5) connecting with one’s own understanding, which involves understanding emotional patterns and becoming aware of how one is expressing them and communicating them.

To conclude his presentation on Team Care, Rev. Okochi spoke of the reasons Team Care came to be viewed as essential: 1) in solving complex issues and factors related to a patients total well being, which reflects back on the definition of “total pain” as being comprised of physical, social, mental and spiritual aspects; 2) because of the high level specialization and narrowing down of different fields of care, a cooperative approach is now needed to bring them together to truly help a patient; 3) the need to bring together functional thought and total human centered thought. Rev. Okochi also spoke of the cooperative linking across professions that occurs in Team Care, which includes new associations within specific fields as well as the unique ones that occur across fields like between religious and medical professionals. In conclusion, he mentioned the requirements of Team Care towards the patient according to nursing theory which are: advocacy for their needs and wishes, accountability (the responsibility to explain things properly), cooperative endeavor among the care givers, and caring.

In terms of Buddhist chaplaincy, Rev. Okochi spoke of the fundamental principles as being: the duty of confidentiality, to not engage in conversion or prosthelytization, respect of the care receiver’s own beliefs and values, and sufficient concern for the environment and background situation for offering spiritual care and spiritual practices. He also explained some of the skills Buddhist chaplain must develop in Team Care, such as maintaining records of care giving actions and results; gaining an understanding of the special knowledge and skills of other fields; and developing the ability to communicate in an appropriate way their own actions taken and results to people of other professions.

From the basis of this talk, Rev. Okochi led the group into a final practice session. Participants were first asked to sit by themselves and to write down a summation of their denomination’s and their own understanding of Buddhism in a few Chinese characters. This character or phrase was to express the core of the teaching as a living practice. The participants then broke into pairs and were asked to explain this character and their understanding to the other persona without reference to any specialized Buddhist terms or concepts. This was clearly a practice in the basic skill of the chaplain to impart their spiritual understandings to prospective care receivers in a more common fashion than as a religious professional. Such a skill is a real indication of whether a chaplain has internalized the teaching of their own tradition and “made it their own”, as one would say. This is perhaps the most essential part of chaplaincy training as prospective chaplains must take all the intellectual learning they have had in their religious training and transform into a deeper heart understanding of the teaching that can be communicated in a variety of ways depending on the context.

With this activity, the group adjourned for the day, setting everything up for a deeper level of communication training with Rev. Jin Hitoshi in two weeks time.

[1] Editor’s Note: This last point almost sounds Christian in the question of theodicy. Rev. Okochi comes from the Pure Land tradition, which along with many other Japanese Buddhist traditions, sees that we are living in the final or corrupted age of Shakyamuni Buddha’s teaching where the experience of enlightenment and the encounter with enlightened masters is almost impossible.