Director of Ributsuken – The Institute for Social Engaged Buddhism

Rev. Jin began with an activity for developing self-awareness through using Egogram, which is part of Transactional Analysis and examines individual personality and the way one perceives the self. In this activity, Rev. Jin brought up the famous words of Dogen, the founder of Japanese Soto Zen, who said, “To study the Buddha way is to study the self.” He then explained that it is necessary for a Buddhist chaplain while becoming intimate with others’ feelings to confront their own self using the eyes of the Buddha.

Rev. Jin then gave a lecture on nonverbal communication while mixing in time for discussion, stretching, and enjoyment. In his talk, he explained the method of “assertiveness” in expressing one’s own thoughts while still developing intimacy. For example, in trying to deal with someone on a train who is listening to music at a high volume, one can use assertive expressions to easily communicate: “the sound from your headphones can be heard outside of you” (indicating the cause); “it’s bothering people” (reflecting on results); “it would be great if you could turn it down” (expressing feeling).

Rev. Jin then led the group through a role play based on nonverbal communication and the importance of going beyond just what one’s says. This involves developing an approach in which one can smoothly create intimacy through an awareness of the way one’s holds oneself and looks at another. The participants selected suitable topics for their consultation and then were assigned to act either as a client who has problems, a counselor to listen to the client, or an observer who offers feedback on the interaction of the client and the counselor.

In the end, there were a quite a number of participants who experienced difficulty doing the role play, such as cases that the observer noticed the listener folding his/her arms when listening to the client or had a hard time to facilitate the client’s consultation because he/she concentrated too much on their manner of listening or nodding too much.

Rev. Jin concluded the session by explaining that, “Many counselors have some response they are holding within themselves. Our role is to figure out in what way we should bring this response out and offer it. Let us respect the intimacy by not offering a judgment based on the thinking that this intimacy leads to some conclusion for the client.” In the case that a question is asked in return or a response is requested by the client, Rev. Jin offered the advice that, “You can begin to develop a proper way of responding by starting with: ‘This is what I think …’ or ‘If it was me, I might do it this way…” 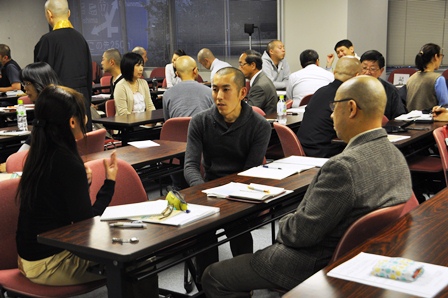