A Priest’s Work Amidst the Nuclear Ginza

Researched and written by Mai Ishikawa. Edited by Jonathan Watts 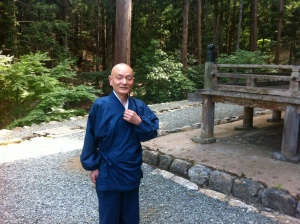 Rev. Nakajima is the chief priest of Myotsu-ji temple, belonging to the Shingon denomination, located in Obama city, Fukui prefecture. Presently (2009), 15 out of 55 power plants in Japan are located near Wakasa Bay. Myotsu-ji is right in the middle of Wakasa. This situation has led Rev. Nakajima to face the reality of the radio poisoned workers. He explained that there are various things that motivated him in his work amidst the Nuclear Ginza. “Most electricity is consumed in the cities. But the nuclear power stations are built in remote regions. My Myoutsu-ji temple is situated above the Nuclear Ginza on the Wakasa cost. There are 15 reactors here. Living up here, I couldn’t go through life ignoring this issue.”

The biggest event that moved him to get involved was meeting radioactive poisoned workers. “Meeting with radioactive poisoned workers and listening to their experience changed my life. I first met them when I was a university student (at Tokyo National University of Fine Arts and Music). Before meeting them I was not interested at all in doing social work. However, I was moved by listening to how they have suffered. They suffer from various health problems. In addition, they are mentally damaged by prejudice and misunderstanding.” Since meeting nuclear polluted workers, he has worked on informing the public of the dangers of nuclear power.

He points out his religious background has also affected his motivation for anti nuclear activism. He feels the importance of teaching of “the fully perfected virtue of benefiting oneself and others” (niri-enman). A buddha perfects both self benefit (jiri) and other-benefit(tari). Rev Nakashima thus explains that it is not about sacrifice, but rather the true way of harmonizing these two virtues. In terms of the nuclear problem, he says this idea can be applied in that all living things, including nature, are “others”. Everyone is affected by others. In this way, the world would be a disaster if we all competed for our own self benefits. The benefit and responsibility of nuclear power plants rely on the balance of “self benefit” and “other-benefit”.

In 1966, at the age of 24, he went back to his home town Obama city and started working as the vice abbot of Myotsu-ji. Along with helping out with jobs at the temple, he devoted much of his time supporting the radioactive poisoned workers. First, he cooperated with other priests from different sects to do fact-finding research by listening to various workers from the nuclear power plants.

In 1968, he started going on alms twice a month in his local village. He knocked doors of nearby houses and rang a bell and recited the mantra of Vairocana Buddha known as komyo-shingon. He also handed out Suzukoe, a newsletter on religious topics and nuclear problems.

He also explains that the city’s autonomy is endangered by large amounts of government subsidies to build these nuclear power plants. “It is true that some in Wakasa have received subsidies for building nuclear power plants which has enriched them … However, once they are built it costs at least 10,000,000 yen (US$ 120,000) to maintain them.” He claims this structural system has not changed from the 1980s.

Rev. Nakajima feels that the situation has not changed much from 14 years ago when the film Nuclear Ginza was made. He said the number of recorded people with nuclear poisoning has increased to 420,000 people. He also states that, “Although technology has improved, the problem of the workers still remains. The situation of radioactive poisoned workers still is critical, because the nuclear power plants are becoming older. The older the power plants become, the higher the level of radioactive pollution. Even now, 60,000 workers work for nuclear power plants. Most of them are released and abandoned after2 or 3 years.”

However, there are times when he feels that his work in Obama city is paying off. For example, when plans for a nuclear power plant in Obama came about twice in the 1970s, citizens cooperated in collecting signatures. Also, recently in 2004 and 2008, Obama citizens voted for a city mayor that promised not to build a storage facility for nuclear waste in Obama. Therefore, the awareness concerning nuclear power has become very high in Obama.

From 1993, Rev. Nakajima joined the Inter-faith Forum for Review of National Nuclear Policy. This forum gathered religionists (including Christians and Buddhists from other sects) from various places to network on anti-nuclear activities. Its main purpose has been to rethink the political background of Japan’s nuclear policy. About the Forum, he says, “As a religionist, I feel there is a great danger with the plutonium policy the government is trying to promote. To save the lives of our descendants, we have overcome sects and belief. “ Since the earthquake, tsunami and subsequent nuclear disasters of March 11, 2011, the Forum has provided emergency evacuation housing in temples and churches for children and pregnant mothers in the areas around the Fukushima nuclear power plants.

Amidst all his activities as a chief priest, Rev. Nakajima has given various lectures to raise awareness. Presently, he concentrates on writing the magazine “Hatopoppo”, published 6 times per year with a distribution of 900 copies (500 copies to people out of Fukui prefecture). This magazine is usually 15-20 pages in length introducing news articles, opinions by various readers, Rev. Nakajima’s views, and information concerning the nuclear power plant issue in Wakasa.

Rev. Nakajima comments about the difficulty of anti-nuclear activities: “At first, it was about not building nuclear power plants; then shutting down the nuclear power plants; then finding out about nuclear pollution, polluted workers, and accidents. Right now, we are forced to think about ways of preventing large nuclear plant accidents from happening.” He has broadened his activities through the years, connecting with other religious activists. In addition, his interests have broadened to politics, economics, and technology.

He states, “Although my work is tiresome and may not have much effect, I want to keep spreading information and maintaining the anti-nuclear power movement for future generations.” His background and motivation from a Buddhist point of view also continues to support his work. He believes now is the time everyone (whether or not they are Buddhist) to take action based on the Buddha’s words. “Do not hurt sentient beings. Also, do not kill. And do not allow others to kill sentient beings.”

From The New York Times April 11, 2011
Japanese Workers Braved Radiation for a Temp Job
Tetsuen Nakajima, chief priest of the 1,200-year-old Myotsuji Temple in the city of Obama near the Sea of Japan, has campaigned for workers’ rights since the 1970s, when the local utility started building reactors along the coast; today there are 15 of them. In the early 1980s, he helped found the country’s first union for day workers at nuclear plants.

The union, he said, made 19 demands of plant operators, including urging operators not to forge radiation exposure records and not to force workers to lie to government inspectors about safety procedures. Although more than 180 workers belonged to the union at its peak, its leaders were soon visited by thugs who kicked down their doors and threatened to harm their families, he said.

“They were not allowed to speak up,” Mr. Nakajima said. “Once you enter a nuclear power plant, everything’s a secret.”