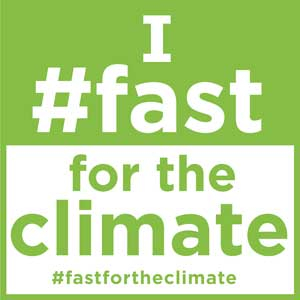 When Typhoon Haiyan had just devastated the Philippines in November last year, climate commissioner Yeb Saño was at the UN climate talks in Warsaw. His own family was caught up in the disaster that killed thousands and destroyed homes and livelihoods across the country.

that would “stop the madness” of the climate crisis. Hundreds of others from around the world chose to fast with him in solidarity.

Despite this, the Warsaw meeting saw countries, like Japan, actually winding back their climate commitments, seemingly in denial that all countries will need to commit and contribute to the comprehensive, global climate action plan that is due in Paris in 2015.

The Fast For The Climate has grown into global movement with participation of youth groups, environmental groups, and faith-based groups, who all want urgent action on climate change by governments this year.

INEB and the ICE Network is a part of this initiative.