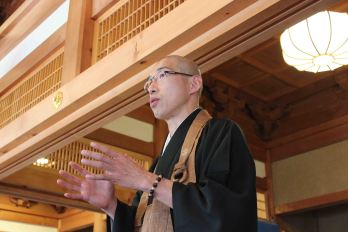 Rev. Taikan Hoshimi is the vice-abbot of Ganoku-ji, a Soto Zen denomination temple located just on the outer edge of the 20 km mandatory evacuation zone in the Odaka ward of the city of Minami Soma.

On March 11, 2011 we experienced the great earthquake and then devastating tsunami. The tsunami was beyond our expectations, and many people died including our temple members. Some lost their family members. Many lost their houses too and were forced to evacuate at once to the elementary and middle schools of this area. Then soon after, there was the nuclear power plant accident, and families were forced to move again outside the prefecture even before their family members who died in the earthquake and tsunami had been found. Fathers, wives, and children were still missing. When their bodies were found by the authorities from the end of March to April, their families could not return to claim them, because there was a shortage in gasoline. The only memorial service they could perform was to have them cremated. So the remaining priests in the area, including myself, worked together across different denominations and households to hold memorial services at the cremation centers.

There were hundreds of dead bodies waiting at the cremation center. Families arrived to identify some, but others were not identified. The priests of some of these people’s home temples had already evacuated, and so these families worried that there might be no one to say prayers for their lost family members. They came to ask us priests to say prayers, and I told them that I would do that for them. They were relieved, and we held memorial services for people who belonged to different temples, regardless of their denomination. There was one case where the family resisted, because they were from the Soka Gakkai Buddhist denomination. However, as there were other people from Soka Gakkai who were pleased that we held memorial services across denominational affiliation, this was just one case.

The work was about twelve hours a day from 8 a.m. to 8 p.m. Those whose names couldn’t be identified were just labeled by numbers. They weren’t even called by their names and were just cremated. I remained here from March and April to finish this work. Since everyone had evacuated at this time, the post office was closed; the bank closed; the mail and newspaper delivery service stopped; all the stores had either nothing to sell or were closed. The situation was that there was nothing, so all we did was go back and forth from the crematorium to our temples. The sun would rise every morning, but it didn’t feel like the sun had risen. It always felt dark and gloomy. It was like that at the beginning.

The nuclear disaster has made us think deeply of the importance of deciding what we should and should not pass down to our children. The situation at present is that people cannot live inside the 20 km zone. Since April 2012, people over sixty who have no health problems are gradually returning to this area. However, people who need care or medical support are prevented from coming back, because the hospitals as well as the nursing homes here are almost all closed. People with chronic illness and those in need of care are in situations where they can’t come back even if they want to. Those who have come back are usually elderly couples, while those under fifty or forty or with young children mostly haven’t come back. The younger generations were the first to evacuate their families, and some men have come back alone to work. There’s a new term to describe these men called gyaku-tanshin or “reverse migrant laborer”. Since this year started, some families have brought their children back with them but many still have not. The choices parents make to protect their children have become diverse as well. Those who return and those who do not equally have their hard times. We can’t tell them to come home; we have no right to say anything towards a decision someone has made. We must understand the hardships that both sides are going through and watch over them without judgment.

There are some people from this area living in the temporary housing units nearby. At first everyone inside the 30 km mark was forced to evacuate. This became the Emergency Evacuation Zone, and until this was relaxed, the people could not live in temporary housing units. After this area became the Secondary-Emergency Evacuation Zone (between 20 and 30 kms), the people were allowed to come back, and temporary housing units were built for the people who lost their houses in the tsunami and for those whose houses are in the 20 km Emergency Evacuation Zone. It’s approximately a straight 3 km line between Ganoku-ji and the temple of Rev. Toku-un Tanaka, Dokei-ji. Around 1.5km from each temple is the 20km line of the restricted zone and the emergency evacuation area. Ganoku-ji is situated in an area where people are only just able to live, while Dokei-ji is situated just in the area where people are not allowed to live. So there are temples that remain inhabited and those that cannot be in this 3 km area, and among our temple members, there are also houses in separate zones.

In this way, we have made Ganoku-ji a center for inviting locals who are able to return to this area as well as those living in temporary housing units to visit and share their anxieties and enjoy time together. From last year, we first expressed our concerns to the authorities and asked them if it was all right to check on those in the temporary housing units. Then, we began to visit these units with government officials and asked all the people to come for a visit. On one occasion, about 100 of them came to have tea and coffee and eat soba noodles on tables we decorated with ikebana, which is a Japanese style of flower arrangement.

Right now, in their hearts, there is no ease, or more accurately, no peace. I don’t know how to express it; as ease or peace. For those who live here, it’s something difficult. Radiation, which is something we cannot see with the naked eye, is causing us to fear and have anxiety for the future and our children. That doesn’t change whether we live inside or outside this area. That’s where the real difference lies between before and after the earthquake, or rather nuclear disaster.