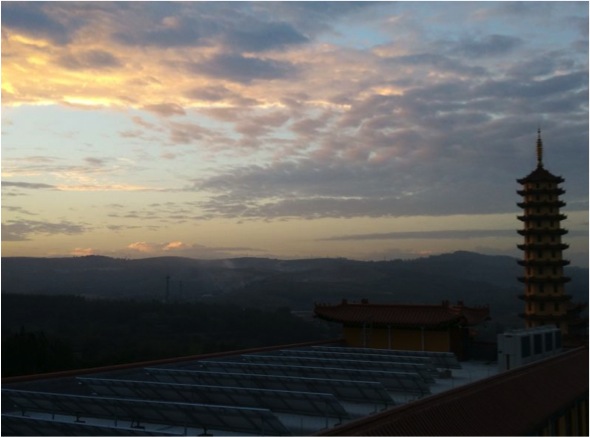 Background: Zhengjue Monastery of Boshan is located in Mt. Lianhua, Boshan District, Zibo City, Shandong Province. It has an over 1,600 year history, being first built in the Eastern Jin dynasty and rehabilitated in the Song and Jin dynasties. During the Southern and Northern dynasties, Master Baozhi, the national master of Emperor Wu, became a Buddhist monk here. The Third Patriarch Ven. Sengchan and Fourth Patriarch Ven. Daoxin of the Chan (Jp. Zen) Sect both trained here. From 2002, Venerable Master Ren Da rehabilitated and constructed Zhengjue Monastery together with disciples. It took 14 years to finish construction on October 4th, 2015. It has a total of 90,000 sq meters; the buildings are 45,000 sq. meters; the green land is 28,000 sq meters; and the area for solar panels is 20,000 sq meters. While outer environmental purity is important, inner environmental purity is of utmost importance so Zhengjue temple has a lot of emphasis on training, such as three-step-and-prostration practice, like Maha-Kashyapa, the Buddha’s great disciple. Ven. Ren Da took an arduous pilgrimage using this practice to Mt. Wu-tai in 2005 at the age of 64 and Mt. Jiuhua in 2011 and at the age of 70.

Temple Structure: The Zhengjue Temple solar project has been in three phases: 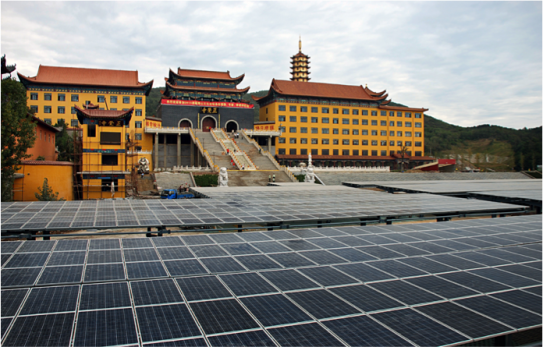 In July 2015, Germany reported that 78% of its electricity was being created by renewable sources, mostly from solar (40%) and wind. In Germany, they have installed 60gW of solar with 60% on residential housing roofs, 2% on commercial buildings, and 20% on open land, so we see how important individual consumers are in this movement. This has all been accomplished in Germany, which is not in the Sun Belt and does not have strong sun light. Roughly 1.4 billion people in the world lack electricity, and 84% of these people live in the Sun Belt so solar power can play an important role in this area. The region of Zhengjue temple is located in the Sun Belt region of the globe. 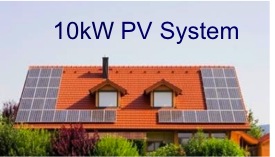 A good example of the simplicity and effect of solar is that if one installs a 10kW PV system of 100 sq. meters of panels, one can generate 525,000 kWh of power from 1,500 hrs of sun over 35 years. This would reduce the CO2 equivalent to planting 1,450 trees and generate the energy equivalent of burning 270,000 kg of coal. Ven. Miao Hai estimates that solar power costs will be equal to other forms of energy by 2020. He also believes that the cost of batteries for the storage of solar energy will drop dramatically in the next 3 years, because Tesala and other electric carmakers are rapidly developing the technology. Since Germany started to develop solar technology in 2004, the cost has dropped 8 times.

Surrounding environment: There is a big problem of water contamination in China with water from even 200 meters underground being tainted. Zhengjue temple’s water is dug out of a well from 502 meters underground from a source dated 300 million years ago. The pH level is 7.0-7.5, so it is clean, very healthy, and slightly sweet in taste. They use their solar energy to fuel the pump for the well and bring it to the top of the temple, where gravitational power is used to circulate it through the piping systems, which are of a diameter 1.2m and height 1.5m.

Another major problem in China is food safety. Before Ven. Ren Da became a monk, he was involved in the food industry (a general engineer in the government’s food ministry), so he has a very good knowledge of what foods have been affected by GMOs and other health issues. Zhengjue Temple has developed tea-seed oil, which is considered to be even healthier than olive oil. They also import a very healthy, small-grain type of “golden rice” (黄金小米) from a partner near the Mongolian border. Through this partnership, they were able to secure non-GMO rice seeds that they distributed to farmers in they area and are also using on our their land.

There is also a major concern for GMO soybeans, which form a staple for tofu and other Chinese foods. Through Ven. Ren Da’s connections, they have secured non-GMO soybeans for making tofu in the temple. They are presently working on developing better waste treatment at the temple and composting, learning from many other groups.

Eco-Dharma: Tea ceremony is another kind of training done at the temple. The Chinese character for tea called cha 茶 is a symbol for eco-life as it indicates people (middle character) living among grass (upper character) and woods or plants (lower character). Chan practice and tea is one important part of Chinese culture. It was once said, “Every temple has tea; with no tea, there are no monks.” Ren Da compiled from the ancient texts the Chan tea methodology and rebuilt its 12-step process. Chan tea practice combines meditation, tea, music and health in one form, with full appreciation, inclusivity, sharing, friendly connections, and enjoyment.

Ven. Miao Hai explains that in the way the Internet decentralizes the production and consumption of information, we need to do the same for energy. This will lead to a change in our lifestyles and a revolution in human values, where individuals and all sentient life are respected and live in harmony with nature. Buddhism emphasizes the right of all sentient life, not just humans. Solar power can also help create world peace by moving away from wars over fossil fuels.

Community Development: Zhengjue temple also emphasizes education, such as a summer campus in Chan training for university students. They charge no admission fee for entry, food, and accommodation, unlike many other temples do in China. In 2015, Zhengjue Temple signed a strategic agreement with the Asian Photovoltaic Industry Association (APVIA)—which develops activities, events, and educational opportunities for the PV industry in the Asia-Pacific region—to promote Chan-Tea culture and eco-healthy development. Through such partnerships, Zhengjue temple would like to partner with INEB to further develop this work.

Ven. Miao Hai with his master Ven. Ren Da have been very busy since our first meeting in late January 2016, visiting various sites in the INEB/ICE network to do needs assessment and installation of a variety of localized solar energy systems, as follows: