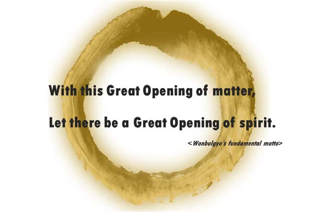 The Economics of Energy Conversion and the Protection of Sacred Sites

The name for Won Buddhism (Wonbulgyo) in Korean) is a compound word for truth, enlightenment, and teaching. Won 圓 means circle and symbolizes the ultimate truth. Bul 佛 means enlightenment, and gyo 教 means teaching the truth. Therefore, Wonbulgyo is the path that leads us to become enlightened to the truth. As a representative of Won Buddhism’s eco friendly movement, I will introduce what we’ve been doing in our religious life for making a sustainable earth, particularly dealing with public interest work like energy conversion. I discuss two main topics: 1) why and how we stand for the anti-nuclear power campaign, and 2) how we have built more than 100 solar powered temples in South Korea. I believe this is not only our Korean society that must face the challenge, but also a global community concern.

Surely none of us has a doubt that we live under the threat of the shortage of fossil fuels, rocketing carbon dioxide rates, and climate change problems. Moreover, we live with the tragedy of nuclear contamination and the fear of nuclear power plant accidents. We have to do anything to mobilize our community to meet these problems. As a religious organization, we follow Won Buddhism’s main slogan, “The world is built based on a relationship of grace; everyone is under the influence of grace; and there is a duty to return this grace with gratitude”. The grace is the earth, nature, our parents, our neighbors, and the law of dharma; nothing can exist outside of this frame.

Jung-Bin Park, the founder of Won Buddhism, said, “Even our natural running water can dry up and lead to draught, if it is wasted.” He also included plants and animals in the category of neighbors. When he founded Won Buddhism, he taught with this slogan: “With this Great Unfolding of material civilization, let there also be a Great Unfolding of spirituality”. Based on his teachings, Won Buddhism is motivated to build a “realistic utopia”. A utopia in the real world can be made possible only if religion and science progress together, along with our healthy body and mind.

The many disasters that we are faced with recently, including climate change, are the consequences of our preference for economic profit over the most important foundation of life, which is nature. This still remains as the greatest task faced by humankind. 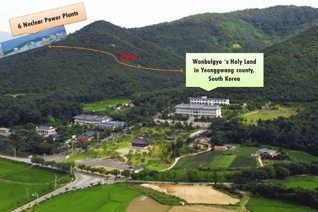 Won Buddhism has been exposed to the danger of nuclear power for a while now. Our sacred land is under the umbrella of nuclear radiation from 6 nuclear reactors that are only 7 kms away. After the first two Hanbit nuclear reactor was built in Young-gwang, the founding sacred site of Won Buddhism, and began its commercial operation in 1985, Won Buddhism created an environmental NGO called “People who Appreciate Nature’s Grace”. This was the former Won Buddhism Eco Network and campaigned against the additional construction of nuclear reactors, which destroy a balanced relationship with the ecosystem. However, two more reactors were built and went on line in 1995, and then even two more in 2002.

By 2003, the residents of Yeong-gwang were violently divided into two groups: one favoring the plant for economic growth, and the other against it for the morals of life. At this time, Won Buddhism gave temporary written orders to 100 monks and nuns to promote an anti-nuclear campaign. Unfortunately, this campaign was unsuccessful. As a minority group, we were often misunderstood as part of selfish regional movement (“not in my backyard” – NIMBY) that opposed the government’s development plans. Thus, we were unable to make a significant change in the government’s energy policy. At this time, we lacked awareness about the alternatives to nuclear energy, and the common people were still craving for more wealth and more convenience.

In 2011, the accident at the Fukushima nuclear power plant caused a big change of atmosphere in Korea. The anxiety towards nuclear power plants in Korea grew immensely, and the provision of alternative renewable energy sources became more urgent than ever. So November 2012, Won Buddhism started a series of prayer pilgrimages, with three following agendas:

We named these “Life, Peace, and No-Nuke” pilgrimages, which start at 10:30 am every Monday and last for around 5 hours. The participants are from various backgrounds, and the size of each group was different. They also continue on in spite of any weather condition, such as rainfall in summer or snowstorm in winter. Between November 26th, 2012 and September 5th, 2016, Won Buddhism hosted a total of 198 pilgrimages with nearly 4,000 participants, raising awareness for the importance of an anti-nuclear policy. We’ve been asked many times, “When will you stop?” An 77 year old man, who is one of the regular participants, said, “I am old, but I have a responsibility for the young, so I cannot take off. My pilgrimage will end when I die or when the Hanbit nuclear power plant stops.” Today, Won Buddhism is walking on pilgrimage again. 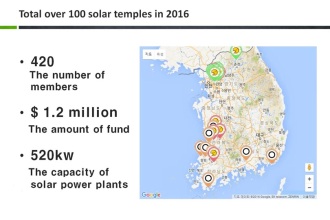 Energy is a key resource for society and community, and not just for the economy. With this growing awareness, we has become concerned with energy as a challenge of sustainability. In 2006, we created the Foundation for the Commemoration of the 100 year founding of Won Buddhism, which will occur in in 2016. In 2013, after a considerable amount of effort, about 50 members gathered to launch the Dung-geun Solar Power Co-op in order to discuss and solve emergent fossil fuel energy problems. It is not an organization which is limited as a research organization run by scientists or civil activists. Rather, it is the first religious-funded energy co-op in South Korea, which practices a consumer-level energy switch over.

Dung-geun Solar Power Co-op is an alternative energy, public business group that builds solar power plants on rooftops and parking lots. It is funded by contributions from co-op members, and creates revenue by distributing the generated electricity. Based on the commemoration of the 100 year founding of Won Buddhism, we developed the campaign “Won Buddhism 100 years, Repaying Favors with 100 Solar Power Temples” and were able to collect “solar funds” through donations to initiate the project. As we move forward, we plan on donating solar power facilities to our small temples and return some portion of the solar fund to back to society. Since the beginning Won Buddhism in 1916, we have had an experience with such public foundations, like creating savings associations and providing land to impoverished farmers from abandoned tidal lands.

A century later, in 2016, the small movement, which for thirty years didn’t let a day go by without thinking about anti-nuclear policy, became the foundation for solar-powered energy plants that collects the limitless energy provided by the nature. We developed the goal to install 100 solar power facilities at applicable Won Buddhist temples and institutions as a project funded by the Foundation for the Commemoration of 100 years of Won Buddhism.

There are 3 types of solar power station in the project:

1) Won Solar Power Plant Association: We build a solar power facility (20 kW) and produce electricity with funds that the Wonbulgyo temple has invested and then make a business selling electricity to KEPCO (Korea Electric Power Corporation). Profit is saved with principal money, and we give dividends per invested money. Through this, we promote people to participate in solar power business, and we proceed with a “Sun-Donation” campaign, which donates part of the profits to energy poor strata.  Surplus electricity is also supplied to neighboring residents.

2) Low Cost Small Solar Power Plant (3kW/6kW/9kW): on each temple to switch power from fossil fuel to solar. With the addition of being more economical in energy usage and also using batteries for solar power storage, we make an example of a temple running itself with 100% renewable energy. Up

to 2015 March, we’ve built more than 12 solar power stations in Won Buddhist temples, rural schools, and social welfare organizations for a total capacity of 500kW. We have a plan to add another 500kW by the end of 2015 for a total of 1,000kW generating in solar power temples.

3) Mini Solar Power Station for Community: We will supply Mini Solar power station (scale of 250W or 500W) to the homes of our believers.

This year, 2016, we achieved our goal of building 100 solar power facilities in South Korea nationwide. Solar power temples earn small amounts of economic benefit. However, they teach the more important

role of successful energy conversion, which contributes to reducing CO2 Emission and helps to expand renewable energy proportion. South Korea’s rate of renewable energy manufacture is shamefully low at 2%, much less than the global average. Our work is helping to cut-down solar power costs in South Korea – as we can see through the graph, and to increase the awareness of a nuclear-free world. We would say that this is “realistic energy citizenship”.

Certainly this is not the end of our work. Last May 1st (2016), we held the commemorative ceremony for the 100th anniversary of Won Buddhism and proclaimed that:

During this global age, people’s lives and destinies are closely interrelated with those of others, and one nation’s fate cannot be separate from those of others. Won Buddhism ultimately aims to build a World of Oneness where peace and equality prevail for all people.

This paper was presented by Ms. Eunsook Cho on Sept. 5, 2016 as part of INEB and ICE’s workshop on Ethics and Ecology: Faith-based Models for Reconnecting with All Sentient Beings at the International Union of Conservation of Nature (IUCN) World Conservation Congress (WCC) in Honolulu, Hawaii.